If you look at a map of the South Bay it certainly appears that Torrance lies just east of Redondo Beach and the closest point to the ocean is a mile or two.  That’s not the case as the Hollywood Riviera, with it’s Redondo zip code and mailing address, is actually the city of Torrance with Torrance schools, services, and more.  Included in this small area is actually a beach affectionately known as “RAT” Beach.  It’s not as bad as it sounds as it actually is short for Right After Torrance but either way it’s a beautiful, yet short, stretch of coastline unlike anything 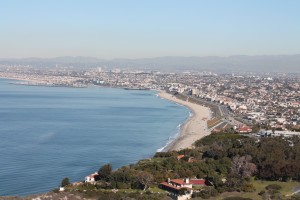 in the neighboring cities of Redondo, Hermosa, and Manhattan.  Torrance Beach sits below the bluff of the Hollywood Riviera and those willing to walk just a bit get a great and somewhat private beach with views of Palos Verdes to the south and the more widely known Beach Cities to the north.  Torrance Beach basically starts where the Esplanade of Redondo turns into Calle Miramar at the start of the Hollywood Riviera.